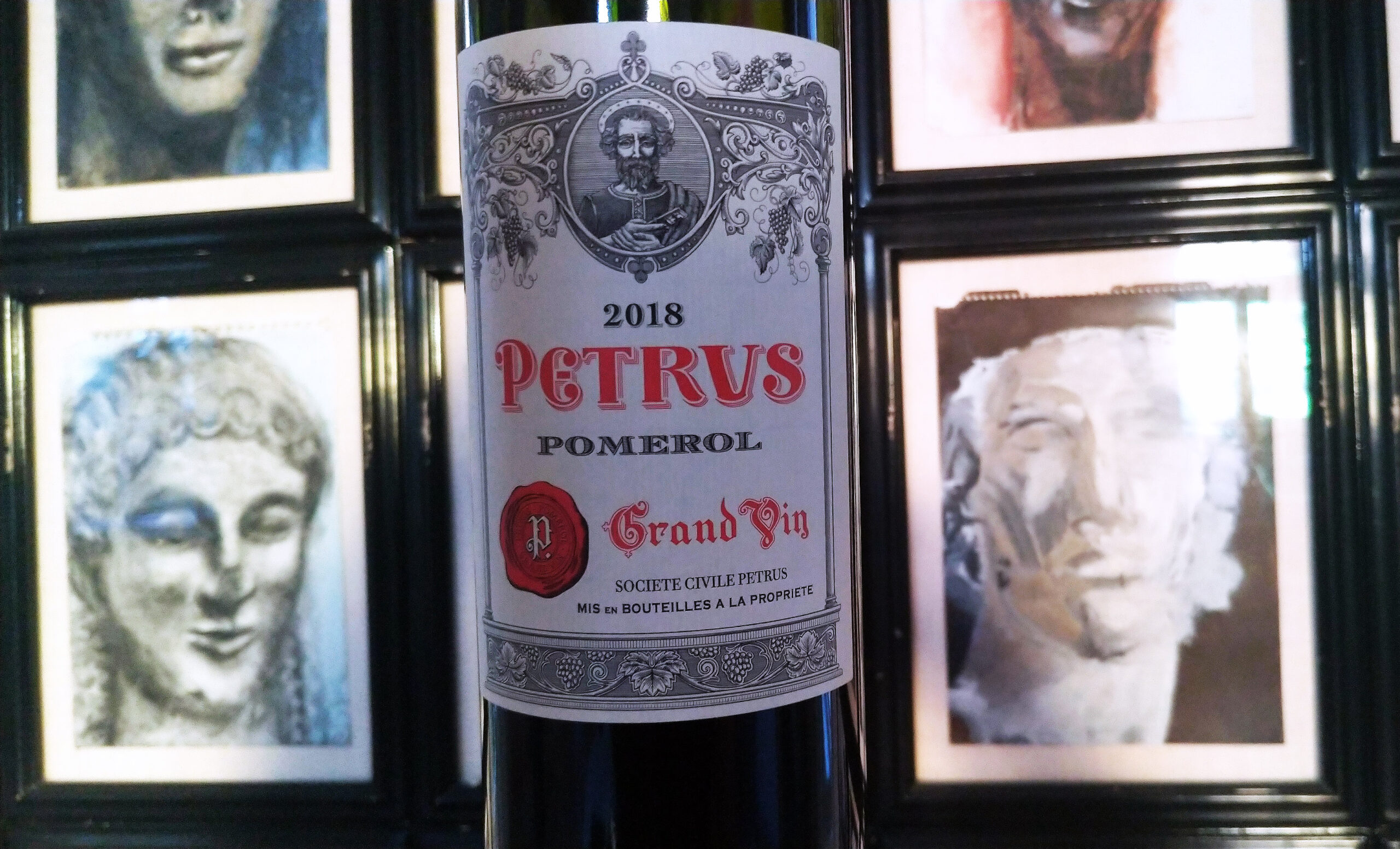 Bordeaux 2018 Wines Brilliantly Confirm the Praise Received during the Primeurs

By browsing through this post, you will visualize the fruit of a thorough work that kept yvesbeck.wine busy between November and December 2020. The objective is not to describe as many wines as possible, even if I’ve tasted more than 1000! For my English-speaking readers, I have published a digital magazine featuring the 100 best wines of the 2018 vintage. You can download it here for only €9.90.

The motivation is to present the many realities encountered locally. From Vin de France to the Grand Cru Classé, from the little estate to the most famous properties that enjoy an international reputation. 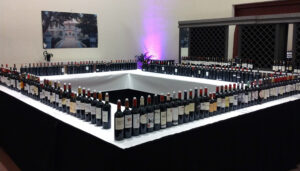 At the UGCB presentation of the Bordeaux 2018 wines at the Dolder Grand in Zurich, the pleasing level of the wines, already highlighted during the primeur tastings, was brilliantly confirmed!

Therefore, I allow myself a little nod to the eternal detractors of Primeurs in general: they’re still very effective! I hope that this unique system in the world will continue to delight buyers, consumers and journalists. It allows us to do some substantive work, to maintain contact with the managers and owners of wineries.

Bordeaux 2018: A Vintage of Paradoxes

The 2018 Bordeaux wines are worthy of many qualifications… we can therefore talk about a vintage of synonyms. “Toying” with words on the daily, I found this denomination quite suitable. Every conceivable adjective has been assigned; between large, medium, exceptional, heterogeneous, everything has been used. I decided for the term “paradoxical”. To highlight the characteristics of 2018, I looked for the synonyms of “paradoxical”and here is what I found:

A vintage of suffering as well, because the vine suffered, the winegrowers suffered, all categories alike. Whether it was mildew, black rot or other diseases that attacked the vines, it was grueling. Not a single winemaker told me that everything went well in 2018. 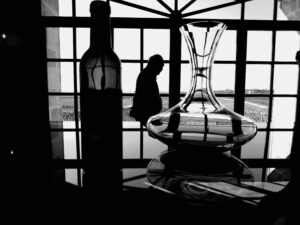 It’s a well-known fact that when Cabernet Sauvignon matures perfectly, it can help produce great wines. Moreover, the appellations of St. Estèphe, Médoc, St. Julien or Pauillac demonstrate this brilliantly in 2018.

Pomerol and St. Emilion also produced great wines. I note the exceptional quality of the Cabernet Francs; it struck me on several properties.

Once again I would like to emphasize the greatness of Fronsac: what regularity and quality. I will not fail to mention the beautiful group shot of Lalande-de-Pomerol where I rarely saw so much homogeneity.

This is where the 2018 Bordeaux vintage is interesting; there are great wines everywhere.

Whether in Margaux, Pessac-Léognan, Haut-Médoc, Montagne St. Emilion, Bourg, Castillon, Francs, Listrac or Moulis. I tasted good to great wines, everywhere! And less good ones all over as well!

The History of the Vintage

Winter had already hinted at it all with a very dark January. Along with the January of 2004, it was the greyest January since 1991. Nevertheless, it was also one of the warmest in the last hundred years!

February was rather dry and cold with 16 days of frosts and a snowy episode on the 6th and 7th. Secondly, the relentless rains made the situation particularly complicated and raised a lot of concern.

These rains also made the vineyard work more difficult, since the waterlogged soils are difficult to treat. Thus, in addition to the hard work of the winemakers, we must mention the commitment of the tractor drivers. The latter, together with their vehicles, are indispensable for combating diseases such as late blight. 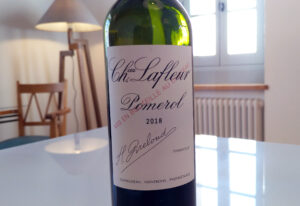 “It is a complex vintage, unsettling, since it started badly, with a lot of rain,” said Baptiste Guinaudeau of Lafleur (Pomerol).

Contrasting April, particularly rainy May and June favored the development of mildew.

The swelling of the first buds was observed around April 10,about 10-12 days later than in 2017. While early April was cold, summer temperatures are recorded from 17°C to 24°C, even reaching 25°C on some days!

Under these conditions, phenological stages evolve rapidly. While the bud-break came rather late, the situation seemed to balance out and the vintage was entering a near-average tune. There were about eleven rainy days in April 2018, but with many variations between the different appellations.

This precipitation occurred early and late in the month, often in the form of showers or thunderstorms. These conditions were very favorable to the vegetative development. At the end of the month, three weeks after the buds broke, the first clusters were visible.

However, this was without considering the month of May. It started like April: cool, even cold with 2.4°C recorded on the morning of May 1st in St. Emilion. Vegetative development was thus temporarily slowed down.

Thereafter, temperatures went up with summer heat between May 17th and 24th. This month was also characterized by heavy rainfall with 70 mm in St. Emilion between the 24th and the 29th and 100 mm in the south-east of Entre-deux-Mers.

The first flowers appeared in late May, under satisfactory thermal conditions. The flowering took place normally over about ten days, without dripping, in spite of a rainy episode between June 6th and 7th.

After this complicated start of the season, everything had to change drastically from July 15, 2018. Thus, summer and drought (which did not make the situation less complicated) settled sustainably. However, before that, the weather had been capricious. Jean-Philippe Delmas, Managing Director of Domaine Clarence Dillon, summed it up perfectly in his presentation of Bordeaux 2018:

“Saturday, July 15, it is 5 pm. The winegrower scans the sky, anxious, the clouds are crying (editor’s note: hail in the Graves region) and 22 people are getting ready to shake the planet. At 6:45 pm, the French team is world champion for the second time in its history. Outside, the rain has stopped! The year 2018, thanks to the hottest and driest summer known after 1990 and 2016, has the potential and the ambition to become a very great vintage.”

“2018 was the hottest year since the beginning of the20thcentury, exceeding the average annual temperature by 1.4°C nationally.”

Baptiste Guinaudeau did not fail to point out to me that it wasn’t the rain or the heat that were striking, but the drought.

“Once the rains were over, there was a huge evaporation. This followed a water stress close to the records of 2010, 2015 or 2016. Despite the rain, it can be considered that the 2018 vintage is of the dry type.”

The exceptionally dry summer from mid-July allowed to reduce the pressure of mildew and ensured the maturation of the grapes.

Before moving on to mid-July, we must talk about the first 15 days of this month, when the situation was very complicated. There had been a lot of rainfall, with significant variations from region to region. For example, 40 mm in the north of the Médoc and nearly 100 mm in the Sauternais.

These humid and warm conditions maintained considerable mildew pressure and vegetative growth remained very active. Maybe that’s where it all came into play. The condition for a perfect red vintage, namely a climate without precipitation after setting, was not met.

Fortunately, the weather conditions changed dramatically as early as mid-July, giving way to a hot and dry summer, particularly favorable for slow maturation.

The first color changes were observed towards the end of July. With the exception of the hail-prone vineyards, the ripening process took place quickly and homogeneously. It ended around August 15.

Not all these conditions were met in 2018, but the result is nonetheless convincing. As I wrote in the preamble, Bordeaux 2018 is a vintage that oscillates between good and great, with some exceptional wines. There’s something to look forward to! 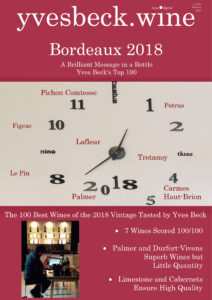 Download the Top 100 Bordeaux 2018 Tasting Report for only €9,90 and discover the tasting notes dedicated to the best wines of the vintage. A part of the wines was tasted during the UGCB Tasting in Zürich, but most of it was covered during my stay in Bordeaux between November and December 2020.

This report was written with valuable information from the Institute of Vine and Wine Sciences of the University of Bordeaux.

I would like to thank the UGCB and the entire Dynamic Groups team for the irreproachable organization of the Bordeaux 2018 tasting in Zurich. In the current circumstances, important hygiene measures have been applied with professionalism and serenity. Thank you also to the friendly, knowledgeable and very helpful staff at Hotel Dolder Grand.

If you would like to access more than 15,500 tasting scores, we recommend that you acquire an annual subscription for only 79 €

You can find out more about which cookies we are using or switch them off in settings.

This website uses cookies so that we can provide you with the best user experience possible. Cookie information is stored in your browser and performs functions such as recognising you when you return to our website and helping our team to understand which sections of the website you find most interesting and useful.

Strictly Necessary Cookie should be enabled at all times so that we can save your preferences for cookie settings.

If you disable this cookie, we will not be able to save your preferences. This means that every time you visit this website you will need to enable or disable cookies again.

This website uses Google Analytics to collect anonymous information such as the number of visitors to the website and the most popular pages. Likewise, we use a Facebook pixel to assess the effectiveness of our advertising campaigns.

Please enable Strictly Necessary Cookies first so that we can save your preferences!